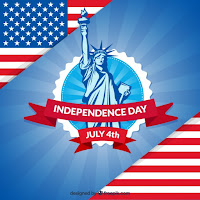 On the Fourth of July our country celebrates  independence from British Rule.  A new nation was born, free from foreign oppression.  Our Nation has thrived over the next two centuries, allowing us to celebrate another year.

I feel strongly about people having the right to govern themselves, and  for nations to celebrate their sovereignty.

Living in the United States of America is a privilege, offers opportunity but comes with obligations.
Being an American citizen makes me proud, not ashamed.  Unfortunately there both friends and enemies who believe in open borders and permitting foreigners to enter our country without any requirements other than their desire to come here.

While it is a noble idea to open borders and permitting refugees into the country without screening, it will also be the end of our nation as we know it today. We are a sovereignty and should be able to set the direction and future of our country.

We are also a country of laws.  That means our various legislators write laws, and law enforcement enforces the law.  With such a system, we don't judge by emotions or favoritism. When there  is no or little enforcement, chaos is created.  This is evident by looking at our current immigration situations.  The fault of our current problems is caused by our own government's failure to uphold the laws over several decades.

Don't blame the offenders , don't blame those who we encouraged to come to this country illegally. In the meantime yes, protect our borders.

Here is a wish for all who consider themselves American, with the hope we can continue to celebrate many centuries in the future.

Here is some suggested reading, an editorial by John Tossel.

The Fourth of July


In the meantime, tell your legislatures to pass laws that can and will be enforced and that are for the good of this country.